For many years, I was hoping, one day, to make a pilgrimage to Unsleben, but kept putting it off.

Then one day, as I was searching the web for “Unsleben”, I came across Fred Nauman’s fascinating and moving account of his “return to Unsleben” (publised in the website of the American Federation of Teachers). There he mentioned a “remarkable young woman”, Angela Bungert, a “resident of Unsleben”, who master-minded the whole thing.

This gave me the idea to spend a day or two in Unsleben, on my way back to the States from a professional trip to Israel. So I wrote E-mail to Angela, asking her to make a reservation in a local hotel, and offering to meet her for lunch, so that after she can drop me at the Jewish cemetery. Little did I know that she intended to take a whole day off to show me around, and prepared a very busy schedule for me.

In her E-mail reply, she gave me several choices, one of which was to stay in the nearby “Waltershausen Schloss [Castle]”, designed by Baltasar Neumann, of Wuerzburg Residence fame, where “Hoelderlin lived for a year”, with its “magnificent view”. Of course, I chose to stay in the castle, and she promptly made the reservation, and sent me her reply.

I arrived at Frankfurt airport Aug. 2, about noon, and then took the train, with two intermediate stops (Eisenach,Grimmenthal) to the closest station, Bad Neustadt. Alas, I missed the connection at tiny Grimmenthal, since the station did not have a phone, so I went to the village to try and make a phone call to tell Angela that I am running late. On the way back, I got a little lost, and missed the connecting train by one minute. It was already 7:00 PM. The next train was at 9:30PM, so I went back two stations, to Meiningen (where incidentally my grandmother lived between 1933 and 1938), and then took a taxi to the Waltershausen castle, that was far enough that the driver never heard of it (but he did know of Unsleben, and I gave him the map).

After about 45 minutes, I finally arrived at the Schloss, and was greeted by Dr. and Mrs. Ulrich M. Moebius, a very interesting and friendly couple, who were the “grafs” of the castle. Then Angela arrived, and she was indeed remarkable, with her boundless enthusiasm and friendliness. We had a nice supper, with very interesting conversation, mostly in German, that I could almost follow. Angela was telling us about her studies of the Jewish history of Unsleben.

At about midnight, Dr. Moebius noticed that “Herr Zeilberger ist muede”, and adjourned the meeting. I was shown to my lovely room, and slept very well, in spite of the very loud ringing of the bells from the village church.

At 8:30am, Angela arrived with her daughter, Anne-Christine Leicht. Dr. Moebius kindly gave us a tour of the Schloss. The castle was indeed impressive, and Hoelderlin must have been very inspired.

As I mentioned above, Angela kindly took the whole day off, and prepared a very tight schedule. First we went to Angela’s house, where I had a very interesting chat with Anne-Christine. She told me that she is going with her class to Israel in a month, and that this is already her second time there. Then, Angela drove me to Professor Dr. Josef Hesselbach, a well-known retired plant biologist from the Max Planck Institute, who now volunteers as archivist of the Wuerzburg State archives. Angela downloaded, from my website, my list of ancestors, and gave him a copy. He kindly looked them up, and to my great delight was able to come up with two more generations backwards, back to the times, in the 18th century, where Jews did not have last names. He also had a lot of information about my GGGG-great-uncles and aunts, including one “shocking” fact. One of my GGGG-grandmothers gave birth to a child, before she married my GGGG-grandfather, and he was not the father. It was nice of him to marry her! Because, if he did not, I wouldn’t be here!

Dr. Hesselbach also told me very interesting general facts about Bavarian Jews. By the mid 19th century, Jews were, on the average, better off than their German neighbors, and had a much lower infant mortality rate, that increased their relative number very significantly. Also the Nazis gave every Jewish man the middle name of Israel, and every Jewish woman the middle name of Sara. Thanks, Dr. Hesselbach, for all that interesting information!

After that fascinating session, Dr. Hesselbach drove me to Unsleben, and we stopped at the house of my grandmother’s uncle and aunt, Moses and Fanni Bach, before dropping me at Angela’s house. After a quick lunch, we drove to Herr Elmar Gensler, the 71-year-old (volunteer!) keeper of the Jewish cemetery, and together we drove to the bottom of the cemetery hill. After a rather steep climb, we arrived at the gate, that Herr Gensler unlocked.

Thanks to Elmar, the cemetery is beautifully preserved, and with the exception of the few graves that were desecrated by the Nazis, the gravestones were very legible. In particular the graves of my GG-grandparents, Meier and Zerlina Bach are in excellent shape. Across from their graves is the grave of their daughter, Regina Gutterman b. Bach (1858-1937), (the sister of my G-grandfather Gabriel, and the grandmother of Henry Gitterman). I was unable to find the grave of my G-grandfather, Gabriel Bach, so I am afraid that his was one of the graves that were defaced. I also found lots of Kuhl graves, including those of my GGG-grandparents, Abraham Kuhl (1793-186?), and Madel [bat Hayim] Kuhl (1797-1857).

Our next stop was at the mayor’s house, Elisabeth Machon (right in this photo), a very charming lady. She is not a native Unslebener, but nevertheless knows a lot about its history. With Angela, we drove to the “vilage hall” (formerly the synagogue), where Frau Machon gave me a nice “official present”: a beautiful framed picture of “Gemeinde Unsleben”.

After we bade farewell to Frau Machon, Angela took me to visit the house that used to belong to my grandmother Hedwig’s family. This is the house where my father, Yehuda Zeilberger, was born in 1915, and probably where my grandmother was born in 1890. Behind you can see where the horses used to be. It is currently occupied by a very friendly young couple, Herr und Frau Hergenhan, and their cute one-year-old son. (Here is the photo that Angela Bungert took of them and me), and here are the Bach family stables.)

The next stop was at the house of Herr Gottfried Then, (Here is the photo that Angela Bungert took of him and me), who, at 97 years of age, is the oldest resident of Unsleben. He is a very interesting and kind man, who still cooks for himself, and grows beautiful vegetables in his garden, that he uses for his soup. I have never seen nicer looking tomatoes. Gottfried’s memory is excellent, and he remembered my grandmother and her family very well. His secret for his good health is “no alcohol”.

Then Angela drove me back to her house, and I was introduced to her father, Franz Bungert, who is just as charming as his daughter. We went to his nearby house, covered with books wall-to-wall, for a a little while, and had a very interesting conversation. Franz is the “official historian” of Unsleben, and is currently writing a very long and scholarly book about its history. He told me about all the documents that are sometimes very hard to decipher, as they are written in old Gothic script.

Then Angela, her cute 8-year-old son Matthis, Franz, and I went to dinner to a charming little restaurant, that also happens to be one of Angela’s customers in her advertising business, Unsleben-concept. Angela kindly pre-ordered a regional specialty, made of fried cheese, that was really delicious. The restaurant was in the nearby Rohn mountain, and the drive back, right after sunset, had magnificent views.

Before we dropped Angela’s father, Franz, at his house, he kindly offered to drive me, the next morning, to my second pilgrimage place, Ermershausen, or rather to the regional library at Hassfurt, where I was to meet another remarkable lady, Cordula Kappner. Even though on the map they look close, and they were close enough for my grandparents to meet each other and get married, it is still a 45-minute ride, and it was extremely kind of him. Thank you Franz! Luckily, because of Franz’s deep involvement in regional history, the visit also (hopefully) proved useful for his own research.

After we dropped Franz, and I was ready to be driven to the castle to get a good night’s sleep, Angela offered to stop for “a few minutes” in her friend’s house, Albert Warmuth. Albert is the brother of another childhood friend of Angela, the famous Artificial Intelligence expert Manfred Warmuth. Albert and his family were not home, so we went downstairs to meet Albert’s parents, Max and Klara Warmuth. They are a very friendly and lively couple, and to my pleasant surprise, addressed me right away with the familiar “du”, which I knew was common practice among young people, but then again, the “older” Warmuths were very youthful. Max told me about his five visits to America, the first as a prisoner of war, and the other to visit Manfred. They also showed me a copy of Manfred’s very interesting PhD thesis, and a copy of his CV. There I was amused to see the name of my old friend, former student, and collaborator, Michael Werman, as one of Manfred’s co-authors. So my “Warmuth number”, in the collaboration graph, is 2. Manfred dedicated his thesis to “my father, who taught me that one can do anything one sets his mind to do, and my mother, whose mathematical talents I inherited, but because of her time and place of birth was unable to develop them”.

At about 10pm, we “gave up on waiting”, and bade good-bye to the older Warmuths. But as soon as we started the car, Albert Warmuth, his wife, and their children, pulled over, and we were invited “just for five minutes”, that turned into an hour and a half. Albert and his wife are just as interesting and friendly as Albert’s parents, and their children are charming. The whole family is very musical, and they sang for me, very nicely, the Hebrew song “Hine ma tov u-ma-na-im”. Albert’s wife also gave me a present, a very thick anthology “Buchfuehrung des Todes”, about the deportation of the Jews by the Nazis, edited by Cordula Kappner (the same Codula Kappner whom I was to see the next day). Albert’s wife also showed me her beautiful artwork, and pictures from a workshop in Italy that she conducted. Finally, by 11:30pm, we left, and Angela drove me, together with her 8-year-old son Matthis (who behaved very well, in spite of the late hour), to the Waltershausen castle, where Mrs. Moebius kindly received me, in spite of the late hour.

Thanks to Angela Bungert, this was one of the most memorable days of my life. 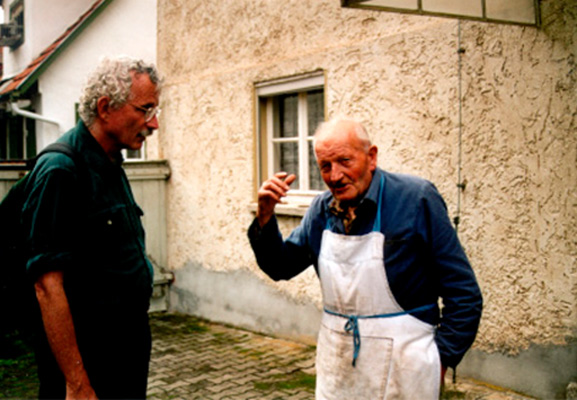 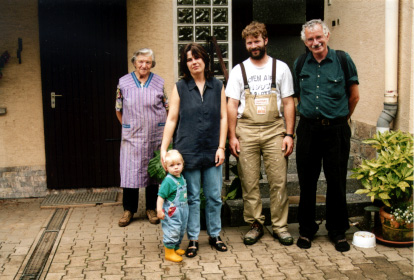